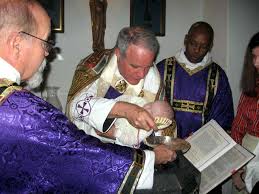 Church Bulletin Easter Sunday St. Michael the Archangel Anglican Church Visitors – Welcome! We are blessed by your presence—may you find peace and joy in our Lord and Saviour Jesus Christ.  Please advise us of your visit and ask for a “First Time Visitor Bulletin” which briefly explains the communion service.  We desire your visit to…

Update and thoughts from the rector.  Friday’s first 15 minutes has updates and messages the rector wants to share, this is followed by the Religion of the Apostles pertaining to Baptism and succession of the priesthood, followed by morning prayer. &nbsp Salvation In order to help explain the Anglican, and thus historic Catholic, position on salvation, the process by which we are brought into communion with God, I think it is important to clarify a couple of the terms that we frequently use but are not always distinguished as they should: Justification is the initial act by…